Please register beginning April 8 at 10:00 AM via Eventkeeper to participate in this virtual program. If you cannot find your library card to register, please apply for a digital card by visiting nassaulibrary.org/digital-card-application. END_OF_DOCUMENT_TOKEN_TO_BE_REPLACED 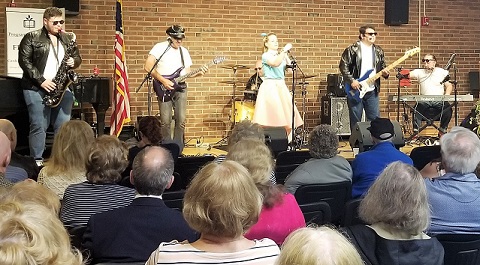 The Friends of the Garden City Public Library held their annual meeting on Wednesday, June 20, at the Library.

President of the Friends Nancy Minett addressed the group, thanked the officers for their continued efforts, and also thanked the Bookworms who handle the book donations. 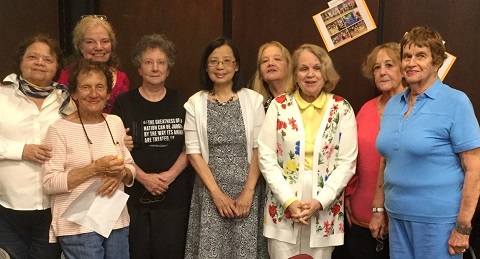 Officers of the Friends are pictured with members of the Bookworms, who volunteer to help with book donations & organize Book Sales.

The brief meeting, which was open to the public, was followed by a lively performance by The History of Rock & Roll.

The mission of the Friends of the Garden City Public Library is to help fund services and resources not provided by tax dollars and to promote the library as a vital community education and information center.

For more information about the work of the Friends, please contact the Library at 516-742-8405.

That’s What the Friends Are For

If you have ever wondered about the mission and history of the Friends of the Garden City Public Library, Inc., stop by the showcase across from the Circulation Desk at the Library this week where the display “That’s What the Friends Are For” is exhibited.

There you will learn that back in 1949, the Village of Garden City was the only village in New York with no public library. A referendum was sent out asking if voters would support the appropriation of funds to build a library. When the proposition was defeated, it was a committee of dedicated citizens (who later became the Friends) who were the spark plug for the Garden City Public Library.

These people formed the Garden City Library Committee “to establish a library in Garden City and to operate it”; held bake sales, rummage sales, and auctions; sent out flyers; and requested donations from agencies and sponsors. The volunteers took courses in Library Training during the summer of 1951 to learn the fundamentals of Library Science. They set up their own library, initially in a barn, later in a bungalow, to prove to the Village that a public library was a community need and asset.

The Village eventually became willing to lend them the little house that it owned at the end of Seventh Street and the renovated building was dedicated on May 4, 1952. The volunteers ran the Library on private contributions of money and work, with the volunteer firemen doing the painting, until June of 1956. Then the Village took over the financial responsibility of the Library.

This tradition of generosity of gifts, services and time has been perpetuated throughout the history of the Library. On display in the showcase are photos taken at the 21 Adult programs, 43 Young Adult programs, and 50 Children’s programs funded by the Friends of the GCPL during the current year. You can also see the logos of the 13 cultural institutions that residents of the Village can visit, free of charge, thanks to funding of the Museum Pass Program by the Friends. These Museum Passes were borrowed over 566 times this year, enabling Village residents to visit the Intrepid, the Long Island Children’s Museum, the Frick Collection, Old Westbury Gardens, the Guggenheim Museum, MOMA, the Nassau County Museum of Art, the NY Transit Museum, and many other cultural institutions without having to pay an admission fee.

All of the costs involved in funding the programs, Museum Passes, weekly movie screenings, and the three newsletters sent to your home each year are generated by the sale of gently used donated books and membership donations made to the Friends of the GCPL. Now, that’s what the Friends are for – and you can never have enough good friends.

So, if you are ready to take on the challenge, consider becoming an active member of this organization. Volunteers are needed in a variety of areas. If you every wished you could work as a party planner, a newspaper editor, a book seller, a publicist, a graphic designer, or if you just have a great love of books or of our Library, we welcome you to contact our Friends’ Volunteer coordinator or Mary Maguire, care of the Library Administration Office.

The Hambones rocked the Garden City Library again this year! 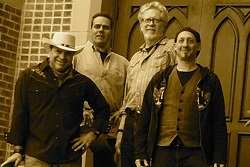 The Hambones rocked again at the Garden City Public Library on Sunday, April 7, 2019.

With a cumulative 130 years in the music business, lead vocalist John Kouri and his bandmates, Scott Milch on drums, John Pizzicarola on guitars, and Steve Soltow on bass, play classic tunes made famous by The Beatles, Rolling Stones, The Who, Chuck Berry, the Grateful Dead, Elvis, Bob Dylan, and Tom Petty.

This program was sponsored by The Friends of the Garden City Public Library.