A group of determined, energetic, and practical women was the sparkplug for the Garden City Public Library. After a proposition to establish a public library had been defeated at the polls in 1949, these women decided to organize a library and prove to the community what an asset it could be. They formed the Garden City Library Committee, and took an adult-education course in librarianship during the summer of 1951 to prepare themselves to operate a library. 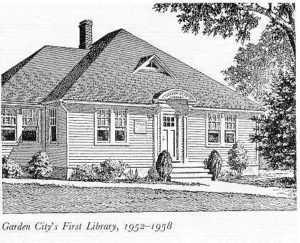 Merchants and community organizations donated materials, furnishings, and many hours of labor to refurbish the white clapboard house at the east end of Seventh Street that the Village had lent to the committee as the library’s first home. Cake sales, an auction, and a membership drive were among the fund-raising events to provide for books, repairs, and equipment. Opening day, May 4, 1952, was a proud moment, although the book collection was well under 10,000 volumes and a circulation of 75 books was a busy day indeed. Mrs. Frances Hinsch was the librarian.

This tradition of community generosity in terms of gifts and services has been perpetuated throughout the history of the library. Many members of the original Garden City Committee ultimately formed the Friends of the Garden City Public Library, Inc., and the Garden City Exchange began its successful career on the front porch of the little house on Seventh Street. The Exchange, which later moved to Hilton Avenue, closed in 2004.

The enthusiasm generated by the fledgling library was the precursor of a successful referendum on March 15, 1955, which made the Library an official part of the municipal structure of the Village of Garden City, effective June 1, 1956. This meant that the Library would be supported with public funds and governed by a Board of Trustees appointed by the Village Board. That June, Miss Jacqueline Danelle became the library director.

When the Village took title to the former office building of the Garden City Company in 1957, suitable alterations were made; a wing was added and subsequently furnished by the Friends of the Library in honor of Mr. & Mrs. George L. Hubbell, Sr. These seemingly ample quarters were dedicated on December 14, 1958. 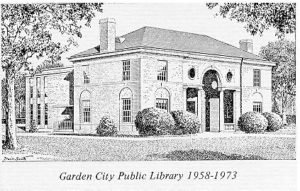 In March of 1959, Miss Frances Hale was appointed library director. The granting of a permanent charter to the Library by the Board of Regents in 1962 was a cause for great rejoicing.

No one could have anticipated the knowledge explosion that took place in the next decade or the challenging new patterns of living and library usage that emerged. As Garden City used its library more and more heavily, the need became acute for a building constructed specifically for library purposes and far more spacious than ever before envisioned. 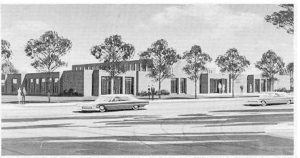 On February 23, 1971 residents of the Village of Garden City approved a bond issue to construct a new building of 38,000 square feet (nearly four times larger than the existing structure), to house a library appropriate to the cultural, educational and recreational needs of the community. This handsome building was dedicated September 30, 1973. Today the Library has over 160,000 holdings, including books, periodicals, films, and other audio-visual materials.

The Garden City Public Library, Viewed from the Corner of Hilton Avenue and Seventh Street

Mr. Alan G. Roeckel, was appointed library director in 1985. Under his tenure, the Library came into the electronic age, with a computerized catalog and other online databases available to patrons at various points within the building and remotely via the Library website.

The Library hosted a “Renovation Celebration” on Saturday, April 19, 2008 to mark the completion of a renovation and expansion project. Library Board Chair J. Randolph Colahan cut the symbolic red ribbon to welcome the public to the Library’s new facilities, which include a redecorated Periodical/Reading Room, a larger Quiet Study area, an expanded Young Adult Department, and a new Audio-Visual Center and Computer Lab located on the lower level. The public was invited to visit the Library and see the many enhancements, as well as to enjoy light refreshments following the official ceremony.

The Library’s renovation project was initiated in response to community needs that were identified in 2003 through a series of focus groups. The Library’s Board of Trustees, J. Randolph Colahan, chair; Gloria Weinrich, vice chair; Barbara Brudie Martis; John H. Pascal; and Elizabeth Huschle, monitored the construction project along with Library Director Alan G. Roeckel and Assistant Director Thomas B. Witt and participated in the “Renovation Celebration.” Senator Kemp Hannon, Assemblyman Tom McKevitt, and Garden City Mayor Peter Bee were among the dignitaries who also attended. Former Mayor and former Library Trustee Frank Tauches, Village Trustee Donald Brudie, former Library Board Chair John M. Delany, and Village Trustee Nicholas Episcopia, who was also the liaison to the Library Board during the project, joined in the celebration. Garden City Friends of the Library President Salvatore Catania and Vice President Thomas Richmond were among several Friends who came to celebrate the special event.

In response to the suggestions emanating from the focus groups, the project included restoring the Adult Reading Lounge, which is now a brightly lit, comfortable, reading room housing the periodical collection in a windowed section of the building at the corner of Hilton Avenue and Seventh Street. The Library enlarged the Young Adult Department and installed four new computers with Internet Explorer (filtered), Powerpoint, Publisher, and Word, and a color printer for students in grades 6-12. The teen- and tween-friendly area has soft, comfortable seating and tables and chairs where young adults can relax and read, or work with one another.

In addition, a storage area on the lower level of the Library was converted into an Audio-Visual Center and Computer Lab, which will include an increased number of Internet workstations. The size of the DVD collection has been increased and includes new foreign-film offerings. The audio-book collection has been increased with both new fiction and nonfiction titles on CD and cassette. In addition, the Library has introduced the Playaway, an iPod-sized, self-playing digital audio book, which is convenient for patrons to listen to while on the go. The Library also added a café area on the lower level for patrons to purchase and enjoy snacks and beverages, which are available from vending machines.

Visitors to the Library will notice redecorating and renovations throughout the Library. The lobby has automatic doors making for easier access for patrons of all ages. There is a newly furnished Quiet Study Room near the Reference Department where the computer center had been located. The Children’s Story Room has two hand-painted murals decorated with favorite storybook characters. In addition, the Children’s Room has added a Special Needs collection, including books in Large Print, on CD and cassette, DVDs, and games.

Mr. Roeckel retired June 21, 2008, after working more than three decades at the Library.

The 30 year-old kitchen adjacent to the community rooms on the lower level of the Library has been replaced at a $20,000 savings to the Library. This capital-budget savings has been realized through a cooperative effort among the Friends of the Garden City Public Library, the Village Department of Recreation, and the Library itself. The kitchen is used by the Library as well as the community groups who hold programs and meetings in the Library’s two community meeting rooms. The Friends of the Garden City Public Library have generously paid for the new kitchen cabinets, countertop, appliances, and supplies needed for the project. The Village of Garden City Recreation Department supplied the skilled labor to complete the renovation by offering the work of several staff members for a few hours each week over several weeks in order to get the job done. This much-needed renovation was completed in March 2009.